* Note: this exercise is based on the previous one, where a pair of asymmetric keys were generated with GPS2 and RSA algorithm:

- A digital signature is a mathematical scheme for demonstrating the authenticity of digital messages or documents.

- Digital signatures are a standard element of most cryptographic protocol suites, and are commonly used for software distribution, financial transactions, contract management software, and in other cases where it is important to detect forgery or tampering.


2 - Signing a file with the private key

- First of all, let's check that both parties (CentOS and Debian) are part of the same GPG2 public-key-cryptographic system:

- Let's create a text file at the CentOS device:

- Now CentOS' root user is going to signed this text file with its own private key, outputting a file with a .ds extension:

- The passphrase generated at the previous exercise is required: 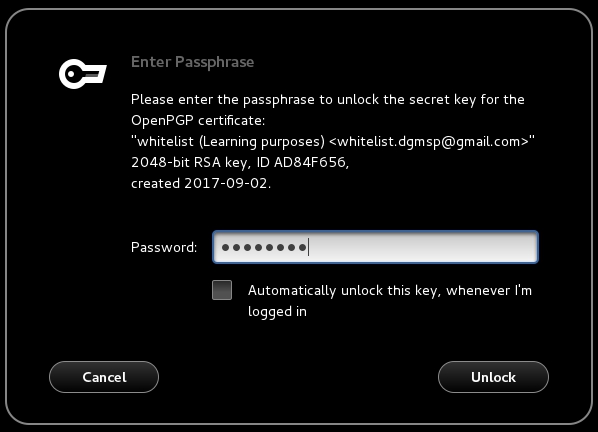 - The .ds file is unreadable because it is encrypted:

- Connecting to the remote device Debian:

- The content of the decrypted file matches the original document written by the root at CentOS, so the whole process has been successful:

- In other words the digital signature provides the non-repudiation property that the sender is really the one who claims to be the sender of the document.

- For this to work it must be computationally easy for a user to generate a public and private key-pair to be used for encryption and decryption.

- The strength of a public key cryptography system relies on the degree of difficulty (computational impracticality) for a properly generated private key to be determined from its corresponding public key.

- Security then depends only on keeping the private key private, and the public key may be published without compromising security.

- This symmetric key is then used to encrypt the rest of the potentially long message sequence. The symmetric encryption/decryption is based on simpler algorithms and is much faster.

- RSA (Rivest - Shamir - Adleman) is one of the public-key cryptosystems algorithm and is widely used for secure data transmission.

- With RSA the encryption key is public and different from the decryption key which is kept secret (private).

- In RSA the asymmetry is based on the practical difficulty of factoring the product of two large prime numbers.

- RSA is a relatively slow algorithm, and because of this it is less commonly used to directly encrypt user data. More often, RSA passes encrypted shared keys for symmetric key cryptography which in turn can perform bulk encryption-decryption operations at much higher speed.

- The Random Number Generator or RNG is a mechanism in charge of producing pseudo random numbers.

- These numbers are then used for generating SSH keys, random PIDs for processes, TCP sequence numbers, and UUIDs for example.

- To get good pseudo random numbers, you need some entropy, what is defined as randomness collected by an operating system.

- Such random number generators are needed for cryptography.

- Entropy doesn’t come from a single source in the Linux kernel. This entropy may be provided by:

i) some internal sources like keyboard timings, network traffic, mouse movements, etc ...
ii) a specific processor instruction like RDRAND available in some processors.
iii) in case of virtual machines through the virtio-rng paravirtualized device.
iv) a dedicated, external, physical device.

- Because of the blocking behaviour, lack of entropy may cause performance problems.

- At the CentOS device, checking the entropy generated by the kernel it yields a low value:

3 - Generating a pair of asymmetric keys

- Working at the CentOS device a pair of keys are generated:

- Specifying never expiration for the keys:

- About the key identification, name, email and comment must be provided:

- A passphrase must be entered:

- As mentioned before random bytes must be generated:

- Finally the public and private keys are generated:

- Exporting the whitelist public key and giving a name with .pub extension:

- Checking that the key file type is public:

- CentOS connects via SFTP with a remote user Debian:

- The remote user Debian has successfully received the public key:

- Listing the key at Debian:

5 - Encrypting a text file with the public key

- Debian encrypts the text file with the public key previously sent by CentOS:

- Automatically an encrypted file is created:

- Debian connects to CentOS via SFTP:

6 - Decrypting the text file with the private key

- According to mentioned at the introduction, in a public key encryption system Debian  has encrypted a message using the public key of CentOS, and the message can be decrypted only with CentOS' private key.

- Now, CentOS can decrypt the file with its own private key (entering the passphrase): 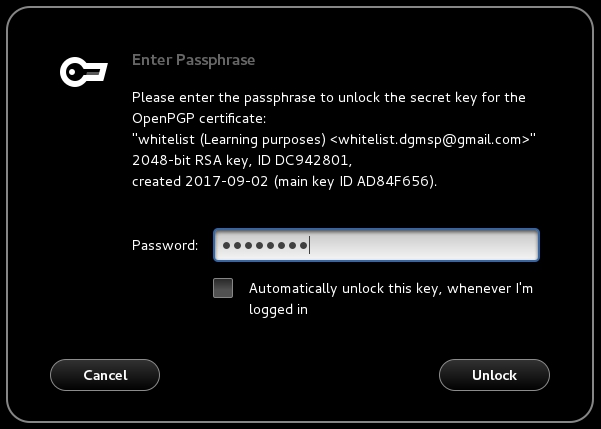 - The decrypted_secret.txt decrypted by CentOS matches the original secret.txt written by Debian so the whole process has been sucessful: